The Houston Latin American Philharmonic Orchestra has been organized:

To execute activities for exclusively CHARITABLE and EDUCATIONAL purposes within the meaning of section 501(c) (3) of the Internal Revenue Code.  These activities will include, but not be  limited to, 1) A professional orchestra performing, commissioning, and recording Latin American music and delivering it to all segments of our society, especially to the Latin American community;    2) To advance knowledge about Latin American culture and its peoples throughout the community, including new generations of Latin Americans; and 3) To contribute to social cohesiveness through  public concerts, lectures, young artist competitions and music workshops

The Houston Latin American Philharmonic is a professional orchestra created to promote and elevate to the highest artistic level possible Latin American music, musicians and composers. 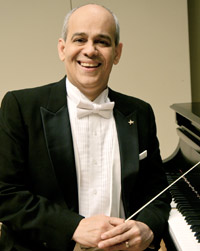 • Was born in Maracaibo, Venezuela

• In the year 2000, he became the first Venezuelan to receive the degree of PhD in Music Education with emphasis in conducting.

• In 1998 and 2000 he received the “Outstanding Academic Award” from the College of Fine Arts at the University of Florida.

• In 2011 and 2012, he was guest conductor of the “Orchestra di Fiati” in Milán, Italy, the National Youth Symphony Orchestra of Argentina in Buenos Aires, the Costa Rica Philharmonic, and the historic “Sinfónica de Sevilla.”

• From 2004 to 2009, he published articles on Latin American music and musicians in the World Association for Symphonic Bands and Ensembles Journal, The Georgia Music Educators Association, and “Mundo Hispánico” a newspaper in Atlanta, Georgia.

• He is a fervent promoter and expositor of Latin American music and traditions. He travels around the world presenting programs like “Echoes of America” and “Made in Latin America”, in which he features music written by Latin American composers.

• From 2012 to 2016, Dr. Garrido was the Chairman of the Department of Music at the University of St Thomas.  He became the first Latin American exercising this music leading position at UST.